I get why you want to learn the best way to deal with rejection because I understand the pain you’re going through.  I’ve felt it many, many, many times. I remember yelling at the top of my lungs   “I’m sick and tired of being rejected!” and then sulking for days over what I felt I lost (though in reality, I never had “it”  to begin with). 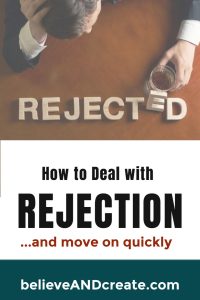 It happened again.  That gut-wrenching, heart-breaking sting of rejection.   I didn’t get the gig that I desperately wanted … the job I would have been so good at.  Why didn’t they see how perfect I was for this? I would have been awesome.  Why does this keep happening?  Why won’t a window open?

It happened again.  The person I’ve dreamed about for months wants someone else … I feel like love’s loser once again.  He’s making the wrong choice.   He and I are soul mates,  I just know it.   I suppose this is just the universe’s way of telling me it’s not meant to be, but why oh why does it have to hurt so badly … again?

It happened again.  I applied for a great college and I could see myself at home on the campus, hanging out at the student union, and walking across the stage in my cap and gown four years from now.  But then the letter arrived: Rejected.  Again.  Dammit, why?  Why does this keep happening to me?!

Do any of these scenarios sound familiar to you?  I’ve experienced all of them over the years and based on recent experiences, it doesn’t look like rejection will be taking a graceful exit from my life story anytime soon.

Rejection hurts.  It’s confusing.  It’s disappointing.   I used to let it drag me down … way down, in fact.

When the rejection happens … 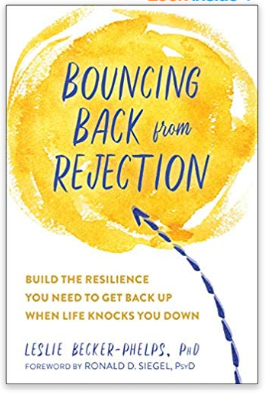 You get your hopes up, you create all sorts of pretty pictures in your head about how wonderful things are going to be and then, bam, you hit a wall once again.   Rejected.  Tossed aside.   Put out to pasture.  Ignored.  Unappreciated.  Unwanted.    Or at least, that’s how rejection can feel at first.

In either a state of anger or hurt, or possibly both, you try to make sense of the rejection, which typically leads to three different types of thinking scenarios:

You can blame others for rejecting you, but that doesn’t help you move on.

In the blame game, you come up with anything or anyone you can blame for the rejection.   In this “game,” there are no boundaries;  pretty much anything is fair game if it can help you rationalize why you didn’t get what you wanted.   Your thoughts may sound like this:

You can beat yourself up because you were rejected. But, how the heck is that ever going to help?

Beating yourself up is the next thought pattern you may turn to.   “After all,” you think, “if I didn’t get what I wanted there must be something wrong with me.”     This is one of my personal favorite valleys to hang out in … though I can tell you from experience that it is a trap that yields nothing positive.

When you’re in the self-punishment zone, your thoughts may begin to reflect unhelpful and untrue beliefs, such as:

You may be tempted to hide so you can’t ever be rejected again. This is the WORST thing you can do!

Finally, you might launch into the third and most dangerous thinking pattern because it impacts your future willingness to take chances:  building walls and lowering standards.  To protect yourself, you entertain thoughts that go along these lines:

While participating in these three thinking patterns makes you quite human … we all do it to some extent … it never helps you.  Never.

How to get over rejection The Right Way!

First of all, you must reframe what rejection means to you.   The simple truth is that you didn’t get something you wanted.  That’s all. There will be lots of things in life that you don’t get.   It’s not a reflection of your intrinsic value.

Rejection is just one person saying “not you, not now, not for this.”  It usually says more about that person’s thinking, personal preferences, or evaluation skills than it does about you.

Rejection happens to all of us.

Not convinced?   Here are few examples of famous people … many of whom are considered geniuses in their fields … who’ve been rejected on a significant level: 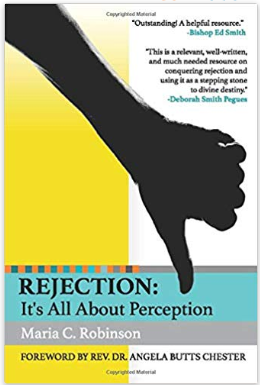 “How can I cope with rejection better?  What should I do?”  Good questions!

The first and most important response to rejection is to look at it as feedback, not a statement of your value.    Keep it in perspective and then ask yourself:

“What if anything can I learn from this?   Now that this thing I wanted isn’t happening in my life, what new doors can open for me instead?”

If you didn’t get a job, it’s okay. There will be other, better jobs that come into your life.  Chances are, in the hiring manager’s opinion (not fact, but opinion), there was another candidate who had experience that more closely aligned with the role than you did.  Often it’s a razor-thin call.

Take any lessons that you can from the experience …  perhaps you need to revisit your resume or brush up on some interviewing skills … then move on.  It just wasn’t meant to be and something better is on the horizon.

If you pitched creative work or creative talents and were rejected, don’t give up.   One person’s assessment of your talent is just one person’s opinion.  You may have to switch up your approach, but never relinquish your determination to succeed.

If you dreamed of getting into a certain college but didn’t, there are thousands of other opportunities that await you.   Your path will be different than you hoped, but it will still be a glorious path filled with opportunities perfect for you.

Whatever you’ve been rejected from, take heart.  It’s not the end of the world.  In fact, it’s just an opening to new worlds you had not yet imagined before now.

Reframe how you look at rejection.  Maybe it’s not a rejection, but a redirection to something even better.

Throughout my life, I’ve found that when I’ve been rejected from something I wanted, I find that I’m really being redirected to something even better.   That “something better” might not appear overnight, but if I stand in faith with an open mind, the “something better” arrives at the perfect time.

Steve Jobs once said,  “You can’t connect the dots looking forward; you can only connect them looking backwards. So you have to trust that the dots will somehow connect in your future.”  Jobs was fired from the company he created, so I think he felt the deep sting of rejection firsthand and then came out with a valuable perspective on the subject,  don’t you?

Right now rejection may look like a stumbling block.  It may be painful and it’s certainly still very disappointing.  Yet, it may be preventing you from experiencing the deep hurt that comes from being on the wrong path for you.  In time, you may be grateful for NOT getting what you once wanted so badly!

The bottom-line when it comes to rejection is that your life is moving onto a different road than what you were imagining, but that doesn’t mean it’s a bad road.  It’s just a different road and it’s a BETTER road for you

You don’t see how everything is aligning in your favor right now, but if you’ll keep a strong positive attitude, an open heart, and a willing spirit, then you’ll find you’re being directed to what’s best for you.

~ Wishing you much peace, love, and joy on your journey.  ~ J. Marie Novak, Founder of BelieveAndCreate.com

“We all learn lessons in life.  Some stick, some don’t.  I have always learned more from rejection and failure than from acceptance  and success.”  ~ Henry Rollins

“Success is buried on the other side of rejection.”  ~ Tony Robbins

“Rejection just motivates me to keep trying and to try to do better.”   ~ Sasha Grey

“Most fears of rejection rest on the desire for approval from other people.  Don’t base your self-esteem on their opinions.”  ~ Harvey Mackay

“I take rejection as someone blowing a bugle in my ear to wake me up and get going, rather than retreat.”  ~ Sylvester Stallone

“You need to develop, somehow, a huge amount of faith and confidence in yourself, because there’s a lot of rejection throughout an actor’s life and you have to believe in yourself more than anyone else.”  ~ Stephen Collins

“A rejection is nothing more than a necessary step in the pursuit of success.”  ~ Bo Bennett

“Authors by the hundreds can tell you stories by the thousands of those rejection slips before they found a publisher who was willing to ‘gamble’ on an unknown.”  ~ Zig Ziglar

“There’s nothing like rejection to make you do an inventory of yourself.”  ~ James Lee Burke

“You have to know how to accept rejection and reject acceptance.”  ~ Ray Bradbury

“When someone says ‘no’ to you, what they are really saying is ‘give me more information so I can say yes!’” ~ Miles Patrick Yohnke

“The effects of rejection can either kill your muse or change your life.”   ~Jane Champagne